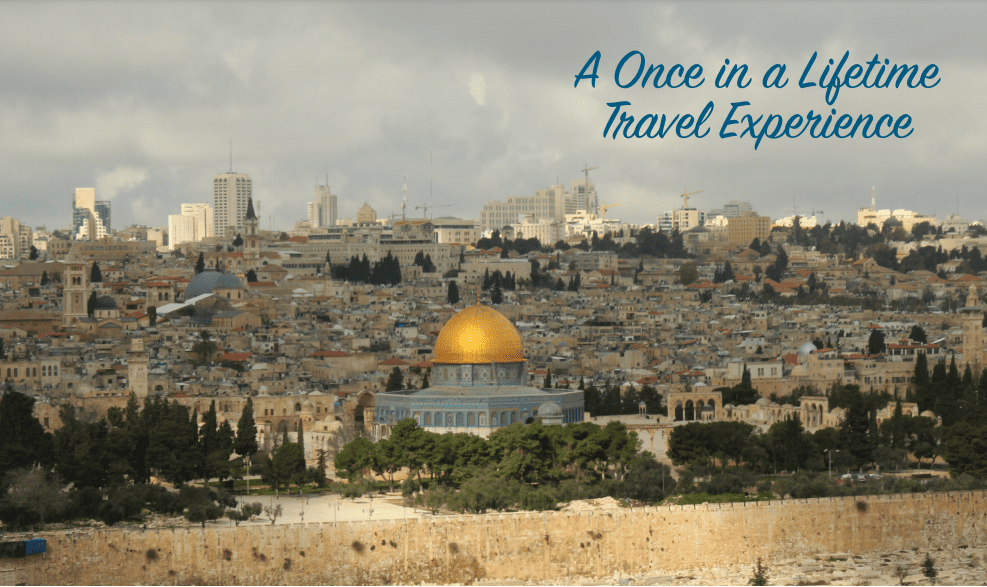 The UAE and Gulf Connection to the Holy Land 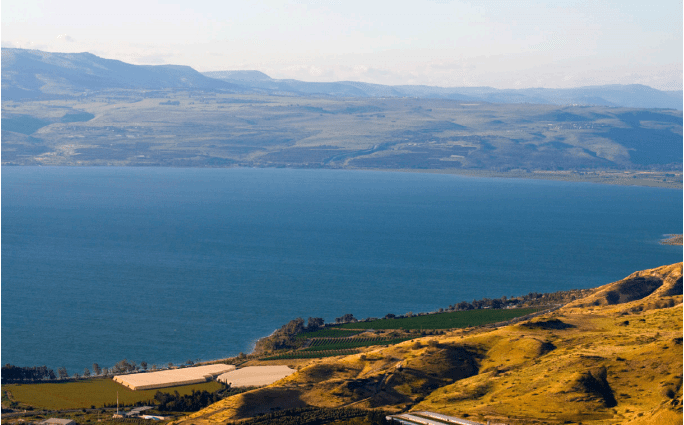 Together we will stand at the place where Abraham once stood and take in the sweeping panoramic views of Jerusalem›s ancient sites and modern landmarks. Legend has it that God brought Abraham here to show him the future location of the holy city, as well as the mountain (Moriah) where he was to sacrifice his own son. From overview we will see the Mount of Olives, Mount Scopus, and the Old City.

Check-In at the Hotel- Rest and Relax before dinner

Friday Night Dinner at the Hotel

Breakfast at Hotel x Start our day at the top of the Mount of Olives From the top of Mount of Olives where Jesus ascended into heaven (acts 1) we will have a view across the Kidron. We will decend via he Pater Noster Church and visit Dominus Flevit where «The Lord wept» as he beheld the Holy City (Luke 19:41-44). Through Palm Sunday Road proceed down to the Gethsemane (Mark 14:32, John 18:1 & Matthew 26:36) where you will see 2,000 year old Olive trees that date back to the time of Christ. In the Garden of Gethsemane the place that Jesus prays (Luke 22:39) and his disciples customarily visited, which allowed Judas to find him on that fateful night of his arrest (Luke 22:47-52). It›s in Gethsemane where an angel from heaven appears to strengthen Jesus (Luke 22:43) and where he found his disciples sleeping and awakes them and tells them to get up and pray (Luke 22:46). Enter the Old City of Jerusalem 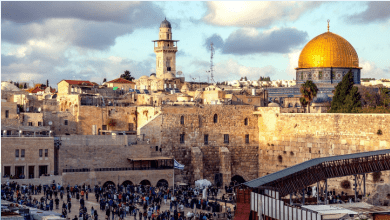 Lunch On Own in the Bazaar of the Old City Continue Touring the Old City and the Christian Quarter Visit St. Anne Church and the Pool of Bethesda where Jesus performed the famous miracle of healing of the paralytic (John 5). We will walk the Stations of the Cross along the Via Dolorosa including Station 2 Judgment Hall of Pilate (John 18:33), located at the Church of the Flagellation and Church of the Condemnation and Imposition of the Cross, all the way to the final Station 14 inside Church of the Holy Sepulcher (Matthew 27, Matthew 33:57, Matthew 28:10). Finish the day with a visit to the Western Wall The holiest site in Judaism and one of the original walls that survived from the second Temple Dinner at the hotel Overnight: Jerusalem (boutique 4-star option or moderate 5-star option)

Breakfast at Hotel and check out Depart the hotel Overview of the Judean Desert from Mt. Scopus Drive through the Judean Desert to the Dead Sea, the lowest point on Earth! Overview of Biblical Jericho Jericho is believed to be one of, if not the oldest cities in the world. It was also the first city captured by the Israelites upon entering the land of Canaan following their 40 years of wandering in the desert after the exodus from Egypt. Jericho also took on importance because of its association with John the Baptist, who was said to have been baptized by the banks of the Jordan on the eastern boundary of the city (Matthew 3:13-15), and the story of the temptation of Christ (Matthew 4:1-4). Visit to the 2,000 year old fortress of Masada Famous for being the last stronghold of the Jewish rebellion against the Romans. We will ascend to Masada by cable car and discover the first century Synagogue, King Herod’s Bathhouse and other sites atop of Masada. Lunch On Own at Masada Continue to the Desert Oasis of Ein Gedi Where David hid in a cave when running from Saul (1 Samuel 23), it was here that David composed several of his Psalms. Swim and float in the Dead Sea At 1,300 feet below sea level, the Dead Sea is the lowest point on earth. But you can make this visit a high point by venturing into the waters for a “float,” as you swim suspended by the high concentrations of salts and minerals. Return to Jerusalem Dinner at the hotel Overnight: Jerusalem (boutique 4-star option or moderate 5-star option)

Breakfast at Hotel Start the Day at the Valley of the Shadow The Hinnom Valley is a deep, narrow ravine located in Jerusalem, running south from the Jaffa Gate on the west side of the Old City, then eastward along the south side of Mount Zion until it meets the Kidron Valley which separates the Temple Mount from the Mount of Olives on the east side of the city. By the time of Jesus Christ, the deep, constantlyburning Valley of Hinnom was also known as the Valley of Gehenna, or Hell, and had taken on a popular image as the place «down there» where the wicked would eventually be cast into the flames for destruction [Psalms 23:4] Visit Caiphas house and Mt Zion The Upper room (Luke 22), Lord’s Supper, visit King David Tomb Visit the City of David, Hezikiah’s Tunnel and the Pool of Siloam The City of David is the birthplace of the city of Jerusalem, the place where King David established his kingdom, and where the history of the People of Israel was written. In the year 1004 BCE, King David conquered the city from the Jebusites and established his capital there. It was here where the People of Israel were united under King David’s rule, here where the Holy Ark was bought and here where the First Temple was built by King Solomon, King David’s son. Lunch On Own The Southern Wall Excavations Here it is believed that Jesus threw over the money changers tables: «he drove them all out of the temple, with the sheep and the oxen, and poured out the changers’ money and overturned the tables. But he said to those who sold doves, ‘Get these out of here! Do not make My Father’s house a house of trade!’»[John 2:13-16 Visit the Yad Vashem Holocaust Memorial- «And to them will I give in my house and within my walls a memorial and a name (a «yad vashem»)… that shall not be cut off» [Isaiah 56: 5]. As the Jewish people’s living memorial to the Holocaust, Yad Vashem safeguards the memory of the past and imparts its meaning for future generations. Dinner at the hotel Overnight: Jerusalem (boutique 4-star option or moderate 5-star option) 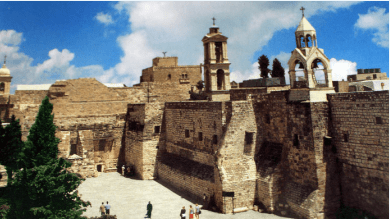 Visit the main Basilica of the Nativity, Also visit the Catholic Church of St. Catherine, adjoining the Basilica of the Nativity, and the nearby Milk Grotto, where Mary nursed her son as the family was taking refuge before their flight into Egypt. A Franciscan Chapel is built above the Milk Grotto. Milk Grotto and Shepherd’s Field Visit the Milk Grotto, where Mary is said to have nursed Jesus when the family fled Bethlehem, and Shepherd’s Fields, a rotunda-topped, round building established in tribute to the shepherds who left their fold to follow Jesus. Lunch on own in Bethlehem Depart to Tel Aviv Walking tour of Old Jaffa and visit to the St. Peter Church Jaffa is a beautiful city rich with historical and cultural significance. Its strategic hilltop location and natural harbor rendered it a contested place since Biblical times. It was from Jaffa that Jonah set sail for Nineveh, prior to his fateful encounter with the whale. Today it is bustling with its integrated mix of Jewish and Arab citizens, who run an array of colorful markets, fine seafood restaurants and interesting shops. Check Into the Hotel Farewell Dinner for those leaving… and those staying Overnight: Tel Aviv (boutique 4-star option or moderate 5-star option)

Breakfast at Hotel and Check Out Free Time to Enjoy the Markets and the Beach – Lunch On Own 1:30 pm Depart to the Airport for those leaving today 4:35 pm Flight to Dubai – FX-15XX

Breakfast at Hotel and Check Out Free Time to Enjoy the Markets and the Beach – Lunch On Own Depart for the the North Drive north along the Mediterranean coast Tour Ancient Caesarea Maritima Built by Herod, the extensive seaside ruins here date back to Roman, Byzantine and Crusader times. Explore the 2,000-year-old Roman amphitheater, Crusader harbor, Roman Aqueduct and 12th-century ramparts, and marvel at the size of the recently uncovered hippodrome. 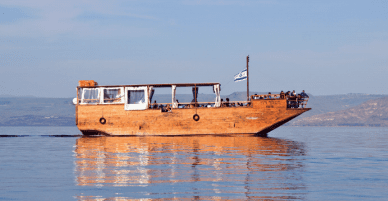 Continue on to Mt. Carmel Visit Muqrakah and the Elijah Cave on the Mt. Carmel, the place of confrontation of Elijah with the prophets of Baal Overview of Megiddo The Biblical Armageddon and one of King Solomon’s chariot cities, the excavations site depicting 20 layers of civilization Dinner at the hotel Overnight: Galilee (Country Inn)

Breakfast at Hotel Drive to Nazareth, the boyhood home of Jesus Visit the Basilica and Grotto of Annunciation Church, 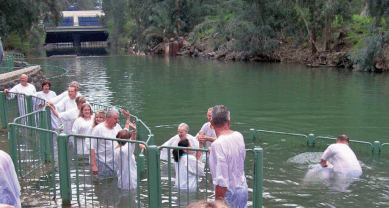 where Virgin Mary received message from Angel Gabriel about her future pregnancy. Stop at the St. Joseph Church and Mary’s Well Lunch On Own Stop in Cane and see the Church of the First Miracle or the Wedding Church The site where Jesus performed his first miracle by transforming water into wine at the wedding Boat ride on the Sea of Galilee Finish the day with spiritual Baptism at Yardenit Baptismal Site Yardenit is situated on the banks of the Jordan River, at the Southern tip of the Sea of Galilee. Each year they welcome over half a million tourists and pilgrims, who come to experience the tranquility and spiritual beauty of the waters in which Jesus was baptized by John the Baptist. Jesus practiced and preached across this part of the Holy Land which hosts a plethora of sites with biblical significance. Yardenit provides pilgrims and tourists with modern comforts in the biblical setting of the Holy Land, offering a serene and spiritual setting for those wishing to baptize in the River of Jordan. Dinner at the hotel Overnight: Galilee (Country Inn)

Breakfast at the Hotel

Visit key Christian sites along the shore of the Sea Of Galilee: Mt. of Beatitudes The site where, as New Testament says Jesus chose his disciples and preached “The Sermon on the Mount” [Matthew 5] Capernaum The center of Jesus’ Ministry, view the ruins of an ancient synagogue and the site of Peter’s house. “Leaving Nazareth he went and lived in Capernaum» [Matthew 4:13] Tabgha, The St. Peter Primacy Church of Multiplication of the Loaves & Fishes. Magdala on the Sea of Galilee The city of Mary Magdalene. See its new excavations and the women’s empowerment center St. Peter Fish lunch (On Own) on the Shore of the Sea of Galilee Overview of the Golan Heights and Syria from Mt. Bental Mt. Bental is 1,170 meters above sea level and offers a spectacular panoramic view of Syria, Lebanon and Northeastern Israel. Finish the day with a relaxing Wine Tasting Today, there are over 250 boutique and 70 commercial wineries thanks to the boom of winemaking. Israel is definitely among one of the up and coming countries producing wines of note today! Dinner at the hotel Overnight: Galilee (Country Inn)

Breakfast at the Hotel and Check Out Visit to Ancient Acre and the Crusader Underground Halls Time for last minute shopping in the Acre Market 12:00 pm Depart to the Airport 4:35 pm Flight to Dubai – FX-15XX

4 Days/3 Nights Deep Dive Extension to the Galilee and North:

Includes 3 nights in Kibbutz Guest Houses or similar Country Lodging
Per person (based on double occupancy) AED 2,685
Single supplement (for those rooming alone) AED 875
Prices based on standard rooms

In addition to above indicated accommodation, Tour Prices also include:

Round-trip airfare in coach class between Dubai and Tel Aviv on group dates
Breakfast and Dinner Daily (except breakfast on day of arrival and dinner on day of
departure)
Entrance Fees per itinerary
Air-Conditioned motor coach throughout as per itinerary
Any Israeli Taxes and/or supplier imposed service charges for all services included in program
Tips at hotels and restaurants
Services of knowledgeable, friendly and professional Israeli tour guide throughout
Services, terms and conditions as detailed in official prospectus

Not included is spending money, extras charged to room, Travel and Medical Insurance, Love Offering for Guide and Driver, Visas, Passport Fees, UAE related fees and taxes if applicable, services other than those listed in prospectus