Arrive in Israel (Meet at the Airport at a Pre-determined time).

Meet your Tour Educator in the Arrival’s Hall.

Welcome to Tel Aviv: Enter the pulsating metropolis of Tel Aviv, the city the never sleeps, the ‘big orange’ that lies at the center of Israel’s cultural scene and economic heart.

Ancient Steps towards New Beginnings: Visit the Old City of Jaffa, ascend from the ancient port, which has served as a gateway to the land of Israel for ions, through the Ottoman period alleyways to the Jaffa Overlook for a view VERY different than the one which greeted the early pioneers. With Tel Aviv sprawled out beneath us, we will explore whether the dreams of the early Zionists have been fulfilled.

Check-in to the hotel.

Shabbat Dinner at the hotel. 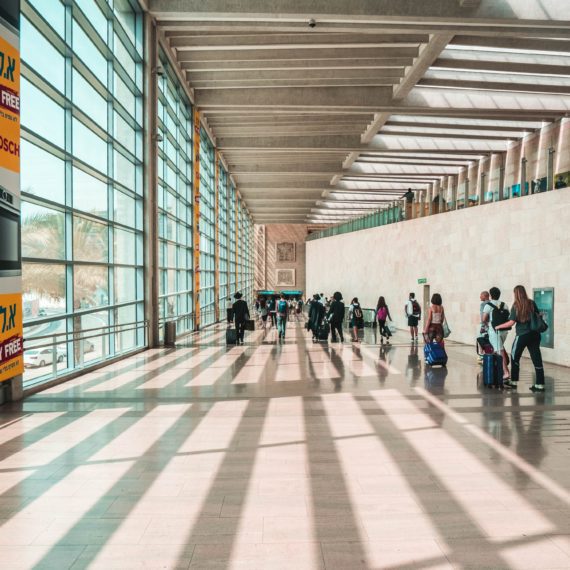 Meet your guide in the hotel lobby for a walking tour (no bus this day).

Lunch on own and free afternoon.

Optional visit to ANU Museum, on own (closes at 2:00 pm). You’re invited to join a fascinating journey that portrays the story of the Jewish people through the generations and up to the present time. The Museum highlights the creative works and cultural riches of a variety of communities in different periods of history. This story is about all of us, and each one of us is part of it.

Havdallah on the beach (weather permitting) or at the hotel.

You can visit Sarona in the evening and enjoy dinner at one of its restaurants. The fascinating and unique story of the Templers in the Land of Israel is spread over 80 years, whereas Sarona’s story has been telling the tale of the Land and State of Israel for 140 years. Today, in its new era, the moshava has an old-new image with an open public space preserving its character.

Breakfast at the hotel and check out.

(If renovations complete and already re-opened) Visit Independence Hall, where David Ben-Gurion proclaimed the State of Israel on May 14th, 1948.

Tour at the Palmach Museum that is dedicated to the Palmach, the strike-force of the pre-state underground Haganah defense organization, which was later integrated into the Israel Defense Forces.

Depart Tel Aviv and drive North along the Mediterranean coast.

Druze Home Hospitality lunch at Dalyat El Carmel. This will be a wonderful opportunity and

window into the lives of Israeli Druze.

Battling for the Holy Land: Encounter the Christian Crusaders and their Muslim rivals at Akko (Acre). This UNESCO Heritage Site was a stronghold of Crusader power in the Holy Land but was also an important center of Muslim Ottoman rule. Today, it exemplifies the multi-culturalism of northern Israel. Highlights of our visit will include:

Continue to the upper Galilee and Golan.

Stop in Metula for the overview of Israel’s Northern Border with Lebanon.

Check in at the hotel.

Tour of the kibbutz and meet with a kibbutz member.

Dinner at the hotel.

Security and Serenity in the Golan

Short Hike at the Banias National Park. This National Park combines a lush nature reserve with archaeological experience. The Banias spring feeds into the Jordan River, the reserve’s large waterfall tumbles down a 33-foot precipice year-round, and a nearby cave houses remains of a temple to the Greek god Pan, including the newly suspension bridge route.

The Balance of Power on Israel’s Northern Border: At Mt. Bental take in the panoramic view overlooking the Syrian border, add to your understanding of Israel’s security situation and gain deeper insight into the regional geopolitical realities that have been occurring across the border for the past decade.

Cross the Golan plateau to the border with Syria and view the abandoned city of Kuneitra and the nearby United Nations outpost, for an insight into the experiences in the 1973 Yom Kippur war, Syria’s ongoing civil war turned world war and the geopolitical challenge and threat along Israel’s northeastern border.

An off-roading ATVs adventure in the Golan Heights. Enjoy the beautiful natural scenery and gain insight into the strategic complexity of the Golan and its perch high above the Hula Valley with vistas deep into Israel’s northern neighbor, Lebanon.

Return to the hotel.

Enjoy the pool and spa.

Dinner at the hotel.

Spirituality and Tradition on the Way South

Breakfast at the hotel and check out.

Drive to Tsfat (Safed), a center of Jewish mysticism for hundreds of years and a contemporary artists’ colony, for a walk through the midlevel alleyways, including:

Lunch on own in Tsfat or en route.

Travel to the lower Galilee and take part in a spice workshop with Sindyanna of Galilee, meet with Nadia Giol and learn how this non-profit organization, led by Arab and Jewish women, is working to create social change, economic opportunities, and fine, fair-trade products.

Deep Dive into the Desert

Breakfast and check out.

Depart Kfar Hanokdim and drive towards the Dead Sea Basin.

Experience the weightlessness of the Dead Sea as you float in its waters; enjoy the hotel’s spa at the Dead Sea beach hotel. After buffet Lunch drive to Masada.

Ascend by cable-car to Masada, Herod’s mountain-palace and fortress, and the site of the Jewish Zealots’ last stand against the Roman Legionnaires 2000 years ago; add yet another layer to the puzzle and discuss Masada’s role as a symbol of Jewish defense and its current significance in modern Israel.

Continue to Jerusalem via Judean Desert.

Enter Jerusalem and drive to the Mt. Scopus for an overlook of the City of Jerusalem. We will recite the traditional ‘shehechiyanu’ blessing for new beginnings, as we set our sights on the beauty laid out in front of us, witnessing three thousand years of history, old and new merging, from the days of King David through the very moments in which we celebrate our arrival.

Check in to the hotel.

Rest & relax. Dinner on own, perhaps at the Old Train Station Plaza, a central neighbourhood hub for food, entertainment, and culture.

The Layers of Jerusalem

Explore the excavations at the City of David, the very core of ancient Jerusalem. View the Gihon Spring, the 3000-year-old water source of King David’s capital and that of the Jebusite city before it. Wade through the water of King Hezekiah’s 2700-year-old water tunnel and continue through the 2000-year-old dry drainage system of the Temple Mount.

Enter the Old City of Jerusalem via the Dung Gate.

Explore the Jerusalem Archeological Park, (including the Southern Steps and Robinson’s Arch) for deeper insight into the Second Temple period, the Jewish pilgrims of the time, why it all came to an end- and why it really didn’t!  From the Second Temple period pedestrian mall below Robinson’s Arch, we will also have an opportunity to view and speak about the Western Wall Azrat Yisrael, the egalitarian prayer space.

Stop at the Kotel (Western Wall) and experience the special atmosphere at this holy site.

Enjoy lunch on own exploring alleyways and markets with anything from hummus & falafel, pizza & shawarma and more as your options.

Take a walking tour through the Jewish Quarter, for guided visits to some of the sites excavated over the past 50 years, including:

Option to stroll through the Christian and Muslim Quarters. Walk along the Via Dolorosa to the Church of the Holy Sepulcher through picturesque Oriental Bazaar.

Visit Yad Vashem, the Jewish National Museum and Memorial to the Jewish victims of the Holocaust, including:

An opportunity to share thoughts, feelings and reflect on your experience.

For younger children (under the age of 11 per museum’s guidelines):

Enjoy “Shuk Bites” in the hustle and bustle of Jerusalem’s colorful and always vibrant multi-cultural Machane Yehuda open air market. Known locally as Shuk Machane Yehuda, this will be the perfect spot from which to join local Jerusalemites in their pre-Shabbat leisurely saunter or chaotic, last-minute surge through the market.

Return to the hotel and prepare for Shabbat.

Optional: Shabbat morning service with one of local congregations.

Lunch at the hotel.

Optional Walking Tour: The Visions of the New City – Discover the fabulous story of Jerusalem’s expansion beyond the Old City as you wander from the Sir Moses Montefiore Windmill through the winding alleys of Yemin Moshe and Mishkenot Shaananim and walk through these same alleyways guided by the writings of its poets and authors – Yehuda Amichai, S.Y. Agnon, and others. Or walk through the German Colony or Talbiyah neighborhoods.

Return to the hotel.

Bein Kodesh L’Chol, Havdallah: Separating Shabbat from the rest of the week, leading into Havdallah, we will have an opportunity to revisit our experience, share our thoughts and begin to answer the question- what am I bringing home?

Late check out of the hotel.

Transfer to the airport for departure flight.

Single Supplement for those rooming alone

Guidelines for Payment and Cancellation

All cancellations must be made in writing and addressed to Anna: [email protected] . The cancellation fee depends on the date when we receive written notification of your request to cancel your booking. Please note that in all cases the deposit remains non-refundable.

Israeli VAT not applicable to non-Israeli tourists for a variety of services and is therefore not included in our prices. In this connection, please note the following:

More than ever, Travel Insurance is a vitally important feature of any planned travel and safeguards against unexpected developments. Comprehensive travel insurance helps to protect you from many otherwise unavoidable financial implications which could result from cancellations, illness, and/or other causes. In view of the Covid pandemic, it is particularly important to cover as many pandemic related events as is possible including the various travel, financial and medical consequences of sickness and/or quarantine prior to, during or following the planned tour. We very strongly urge you to travel with appropriate and comprehensive travel and medical insurance. For more information about travel insurance, please contact us.

Throughout the world, human lives have been dramatically impacted by the Covid pandemic, nowhere more so than in the realm of international travel.

As always, Routes maintains as its highest priority the safety, health, and welfare of its clients. Our tours adhere to all measures instituted by Israeli government authorities and our professional teams go to lengths to ensure as smooth and seamless a travel experience as is possible within the context of ever-changing realities.

It is important to remember of course, that fluctuations in country policies affect procedures for departure from one’s own country as well as for entry into destination countries. As we have learned over the past two years, the fluidity involved in travel-related situations requires all parties to continue to be aware of circumstances as they develop. At Routes we are in constant touch with all relevant regulatory bodies including the Ministry of Health, the Ministry of Tourism, and the Interior Ministry to comply with any mandated procedures for entry to and travel within Israel. We will of course make you aware of Israeli requirements and limitations which are known prior to your travel so that you can be as fully informed as possible, whether in connection to testing, vaccination, quarantine and so on. Aside from checking any local travel advisories which may be applicable to you, please consult the most current Covid related guidelines for entering Israel on Israel’s Health Ministry Portal.

We urge all our clients not only to doublecheck procedures on their end but also to secure comprehensive travel and medical insurance which covers as many pandemic related events as is possible including the various travel, financial and medical consequences of sickness and/or quarantine prior to, during or following the planned tour.